The William Wiersma Foundation was formed in 2014 to honor the life of Bill Wiersma and to establish a legacy in tribute to his belief in education. The Foundation is funded through generous contributions in his honor from friends and family members.

The Foundation is registered under Section 501(c)3. 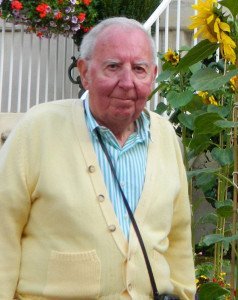 William “Bill” Wiersma was born (1931) on the family farm outside of Friesland, Wisconsin and was raised there until he and his parents moved “to town” (Friesland) in 1946. He was the youngest of six children, and especially because his next oldest sibling, Bob, was 11 years older (another bother died in childhood), as a young boy, Bill was expected to work long hours beside his father in the running of the farm, as all of his brothers had done.

Bill spent eight years attending a one-room schoolhouse, the Portage Prairie School, where he fondly remembered the names of every teacher, and that they were all “excellent, and gave me a lot of attention.” He had Adeline Krueger for first grade, her sister, Ruth, for Grades 2 and 3, Margaret Smits for fourth, and Leota Steinich for Grades 5-8. Bill’s brother, Bob, was drafted in 1942, and fought in Europe during World War II. In addition to the stress and worry that Bill shared with his family and other Americans during that time, he was the only one left to help with farm chores. He would rise early, milk the cows and do chores, attend school, and then return in the afternoon to work in the fields. His school attendance was sporadic, at times, and Ms. Steinich had to make special arrangements for Bill to take the county competency test (required for graduation from eighth grade) because planting season on the farm meant he had not been to school since April.

In 1945, when Bill graduated from eighth grade, many students did not attend high school. Bill’s father was adamant that Bill remain on the farm, as all of his siblings had done. Ms. Steinich and the Cambria School Superintendent, Mr. Koeppe, came several times to Bill’s house to try to convince his parents to allow him to attend high school. Bill and his mother wanted him to attend, but his father held firm, and the school year began without Bill. Everyone continued to put pressure on Bill’s father, school officials, Bill’s mother and brothers, and especially, Bill. His father finally relented, and Bill began high school in Cambria several weeks into the term.

Bill graduated from Cambria High School in 1949, and by that time, his parents had moved into Friesland, and he was no longer needed on the farm. Throughout high school, Bill had his hopes set on college, and attended Hope College in Holland, Michigan as a freshman. Bill’s best friend in high school, Don Tillema, had attended Ripon College as a freshman, and both decided to transfer to Stevens Point College their sophomore year. Bill graduated from Stevens Point College in 1953, fifth in his class, with a Mathematics major, and received the Joseph V. Collins Mathematics Award.

Bill was drafted in 1952, but was granted a deferment until his graduation. He was assigned to the Engineer School at Fort Belvoir, Virginia, where he analyzed data from surveyors and taught topographic computing. His service in the Army gave him access to the GI Bill, which he used to attend graduate school.

Bill attended the University of Wisconsin, Madison, for graduate school. Although a gifted mathematician, his first love was education, so he combined his interests into the development of quantitative approaches to educational evaluation. He earned a Masters degree in 1957, followed by his Ph.D. in 1962.

Bill joined the faculty at the University of Toledo (Ohio) in 1963, where he founded, and directed, the Center for Education Research and Services, received many accolades including “Outstanding Teacher” at the University, and “set a standard that will long guide those on the faculty,” according to his colleagues. Among numerous honors throughout his career, Bill earned a prestigious U.S. Department of Education Special Fellowship in 1969. He spent a year at Educational Testing Services in Princeton, N.J., working on the geometrical construct of multivariate analysis of variance, which he published later that year.

Bill retired from the University of Toledo in 1987, but taught as an Emeritus Professor for another 14 years. He continued his work via his private consulting service until full retirement in 2010. His exemplary career is distinguished by the successes of many students he has taught and mentored, the methods of evaluation and programs he developed, and by a prolific publication record.

Bill loved to teach, and in addition to his lifelong work to improve education in a broader context, he was, himself, an exceptional teacher. He knew, and was living proof of, the value of education, and at the same time, he appreciated the struggles and sacrifices that are often required to achieve those goals.